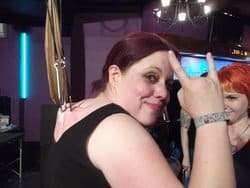 If you have a problem with reading about or seeing images of needles or blood then maybe read a different blog post! 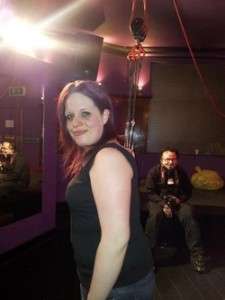 I have recently had my most intriguing and interesting client and she was very happy for me to share a few details of her experience. She is happy for her experience to be used to inform and educate people who are maybe oblivious to the types of things she, and others, do.

Click to read Vicky's review of pain management hypnotherapy sessions and find out for yourself what she thought of hypnosis.

Vicky came to me as a failed 'hooker'. She had tried it before and was unable to get over the mental blocks which were preventing her from enjoying the activity she had decided she was going to do.

Her first suspension resulted in temporary deafness in one ear and she passed out four times in her efforts to get off the ground. Vicky's ultimate goal was to have her back pierced with large hooks and to then be suspended from the ceiling. People who do this often call themselves "hookers".

This video from New Zealand is by a group called Skindependent and gives an insight into this amazing process and why people do it.

"BUT WHY WOULD YOU DO THIS TO YOURSELF??" I am guessing you are asking yourself. I'll come to that in a moment...

Through my in-depth conversation with Vicky and through my own research I took the time to find out why a small, but growing, number of people are taking to this most extreme of pastimes. Before Vicky came to me I was already aware of what suspensions were as during my university years I was friends with a number of people who were also interested in this area.

When Vicky first contacted me she was unsure what my reaction would be. She had already contacted a different hypnotherapist in Sheffield who condemned her and her decision. She was met with disbelief, derision and was told she was "barbaric"!

The unconditional positive regard and respect that a therapist should have for their client (or potential client) was seriously lacking in this interaction. I won't name and shame the therapist in question but I was saddened and shocked that Vicky had this experience.

When Vicky told me what she was planning I was amazed and impressed and was honoured to have been asked to be a part of it. The act of suspending the body from hooks has a long history stretching back hundreds of years.

Vicky is incredibly motivated and driven and refused to allow anything getting in the way of her experience. She had previously attempted a suspension but had been unsuccessful in getting and staying off the ground, which is the ultimate aim of being suspended.

The thing that had prevented her success was her thoughts. She had focused on the pain and because she was focusing on her negative experience of the event it was amplified and this prevented Vicky from achieving the elation, joy, pleasure and satisfaction of being suspended off the ground by nothing more than two hooks in her back.

The process of being suspended has been compared to flying or an out of body experience. The reason for this is the endorphin rush that comes with the suspension. The body is flooded with feel good hormones that have the potential to block out the sensations of the piercings and the body's weight hanging off them.

When this happens and the body is suspended it is possible to feel as if you are weightless and levitating. Many people have such an overwhelming experience it reduces them to tears of pleasure and happiness.

Around the experience itself is the community which many find just as enjoyable as the suspension itself, if not more so. It is a very small group that finds themselves doing suspensions but those groups exist all over the world. As the internet spreads the experience and the potential of what can be achieved through suspension more and more people are doing it.

The suspension community is very tight knit as doing a suspension requires teamwork and absolute trust in the people you are working with. Added to this is the shared enjoyment, pleasure and ecstasy from the process which inevitably bonds people even tighter.

My work with Vicky was intended to help her become fully immersed in this experience.

We began with an in depth consultation which lasted over an hour and a half. I already had a basic knowledge of suspensions but I wanted to know what she thought and felt so I could understand her concerns and discover her strengths and motivators. Three days after our consultation we had the first treatment session. This was the beginning of helping Vicky to tap into her potential for deep and profound relaxation which lies at the heart of hypnosis.

In the following two sessions of hypnotherapy which happened over the following 9 days we added more and more to her experience. She developed her understanding of trance and I showed her a number of techniques that could be used at various stages in the process. 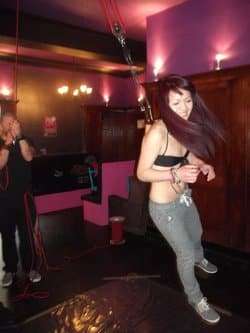 The three areas we focused on were the build up to the event which ran from the day we had the session to the day before the suspension. We looked at techniques that could be used on the day itself in the few hours before the suspension and finally we developed techniques that could be used while she was being pierced and then suspended. One of the most significant things we did was in the very first session.

While Vicky was telling me about her first suspension I noticed she used the word "pain" very frequently, as you would imagine I am sure! Hypnotherapy is all about language and through a tweak in the language you use to describe a thought, feeling or sensation you can actually alter your experience of that event. I asked Vicky from that point onwards to not think or talk about experiencing "pain" and instead to think of it as "discomfort". This was backed up and amplified through suggestions made during trance.

All the sessions were recorded and Vicky was given these on a USB flash drive so she could listen back to them and practice the techniques at home. Unfortunately Vicky leads a busy life and was only able to listen to the recordings a couple of times.

The day of the suspension arrived and she went into the experience excited, calm and relaxed. Vicky was doing the suspension with her friend Hoi who Vicky had discussed the hypnotic techniques with and she had listened to one of the recordings of a session with Vicky. Hoi was able to be suspended very quickly and easily, it took just 40 seconds for her to gradually put her body weight on top the hooks through her shoulders and to leave the ground.

Then it was Vicky's turn...

Vicky found the process of being pieced to be very tough. She has quite thick skin (according to her piercer) and the piercing has to be quite deep otherwise there is the potential for the hook to be ripped out of the skin. With Vicky having tough skin though it caused a lot of discomfort but she pushed through this and was soon hooked and ready to go. As soon as Vicky began to be winched slowly off the ground her attention slipped and she began to doubt herself and her ability to cope and was almost overwhelmed by the moment.

Luckily she was able to use the anchor I had installed on her right hand. An anchor is a physical movement (often pressing together the first finger and thumb to create a circle) and this is associated in trace with a useful or resourceful memory. This anchor had been made especially strong for Vicky and when she pressed the first finger and thumb together she was transported back to a fantastic memory that encouraged and supported her in continuing with her suspension.

The calming effects of the anchor and the gradual winching up soon had Vicky in floods of tears. Not from the discomfort but from the over whelming physical, mental and spiritual sensations being experienced.  Vicky was close to being off the ground but was overcome by the moment and had to return to the ground. She took a breather, composed herself and faced the challenge once more.

This time she tried a particularly effective technique I had taught her. Submodality transformation is the technical term for the technique Vicky employed but basically it is a mental modification of individual aspects of an experience and thinking of them being different.

This technique can be used on any of the sense but in Vicky's case we focused only on the kinaesthetic sense, how the discomfort felt. Vicky took the information her body was providing her and she modified it.

To begin with the discomfort was a huge red hot sunset but in her mind Vicky made the sun set and as it did she imagined the temperature reducing, the colours changing and the size of the sun set getting smaller as it crossed the horizon to eventually become a small pin prick of light. Through this technique she changed the sensations until it felt like an intense pressure rather than an intolerable pain.

Vicky experienced an intense joy and peace as a result of her experience and now feels that there is nothing she can't do.

"Thank-you for making my suspension an experience of a lifetime! I shall be using your recordings to help me to prepare for my next adventure with hooks in September. Many thanks and all the best in your work. Vicky - A very happy 'Hooker' "

If you are interested in finding out more Vicky did her suspension with State Of Bliss.