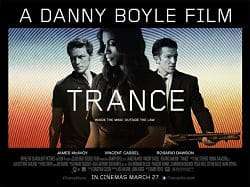 Says hypnotherapist Deborah Marshall-Warren, taking us right back to the cliché of the swinging watch.

"In the two decades I've worked as a hypnotherapist, the biggest myth I've encountered is that we mess with people's minds. It's completely unfounded. Hypnosis isn't about disappearing into another realm and handing control to someone else. It's simply a deep state of relaxation, through which you can free yourself from certain behaviour patterns, negative thought processes or phobias.

A hypnotherapist’s view on Trance

Unfortunately, this film directed by Danny Boyle – in which a Harley Street hypnotherapist, Dr Elizabeth Lamb (Rosario Dawson), works with an art expert, Simon (James McAvoy), to find out where he put a stolen painting – will do nothing to dispel this stereotype. It feels 20 years out of date: we're right back to the cliche of the swinging watch.

Dr Lamb proves a malign influence on Simon – and the film seems to suggest anybody working as a hypnotherapist is intrinsically sinister. This is unfair; we're here to help, to heal. Hypnotherapy is ripe for demystification and respectability. And as for a romantic involvement with a patient – that's completely unacceptable. Anyone who crossed that boundary would be immediately struck off."

via A hypnotherapist's view on Trance | Film | The Guardian

What an astoundingly silly review of Danny Boyle's new film by Deborah Marshall-Warren! As a hypnotherapist I have a couple of problems with her review. Deborah could have used a common hypnotherapist's tool, reframing, and turned a more positive focus on the film. Instead of saying

"This film is improbable/ unbelievable/not representative of the industry" she could have said "It is fantastic that hypnosis is getting a featured role in a massive film by an internationally renowned director and is increasing the profile of the industry."

You wouldn't expect someone to say "This book about a lion, a witch and a wardrobe is completely unbelievable!" Of course it is! That is the point! If films were completely factual and entirely based on reality then we would have a LOT fewer films to watch and what is out there would be dull as ditch water. People want something based on reality which is then twisted, adapted and modified to create something engaging and entertaining... but believable! That is what Trance does.

The film shows people changing habits, obesity and phobias, it doesn't sound like the only representation of hypnosis in this film is "intrinsically sinister". I think most intelligent people know that things represented in films are not always 100% accurate.

I have a bigger problem with supposed professionals like Deborah Marshall-Warren saying things like "We are here ... to heal". I have never "healed" a single person in my time as a hypnotherapist. I don't have any messiah-like abilities and neither does Deborah.

We have both helped people to think and feel differently and for some people this is transformational and has a HUGE impact on their life. To be relieved of this burden can feel to the individual that they have been "healed" but in reality they have been helped to be a way they were already capable of being. Deborah does NOT have the ability to "heal" and to use language like this is rather surprising of a trained professional.

Personally I think it is great that hypnosis is reaching a bigger audience through this film. Go see it!